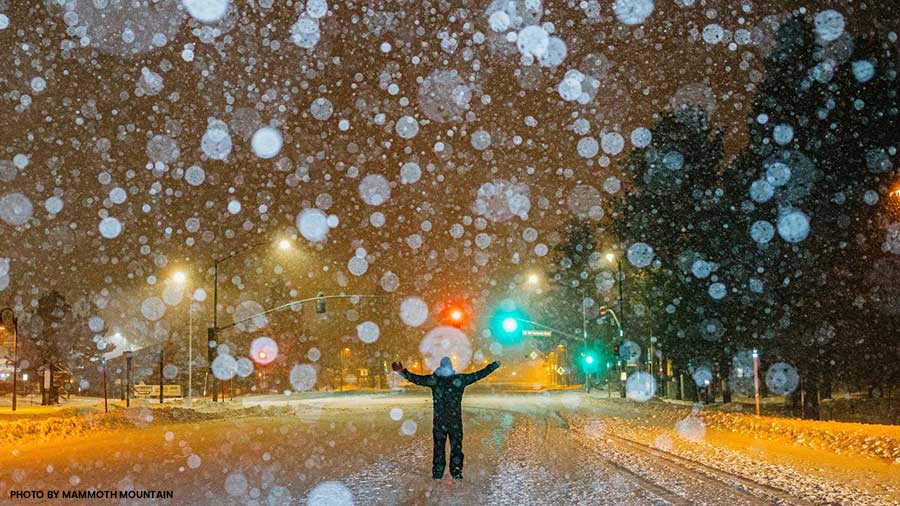 Posted on December 6, 2020May 27, 2021Posted in Skiing, SnowboardingNo Comments on Video of What Makes Mammoth Mountain Snow so Special

For most people, skiing and snowboarding are simple sports. You just strap something to your feet and have as much fun as possible while going from point A to point B. However, the story behind the snow that people ski and snowboard on at Mammoth Mountain is much more complicated than that.

In fact, from the time Mammoth Mountain snow has fallen and melted it will have passed through global weather patterns and massive geography and also determined how much water millions of people have access to. Whether you’re obsessed with snow or are in the middle of the off-season and need something to satisfy your powder daydreams, the Mammoth Bound team has put together a guide to learn about the complex science behind Mammoth Mountain’s snow below!

Ski mountains all over the world receive snowfall for the same reason. As weather systems packed with moisture rise over a mountain range, the precipitation inside of them condenses and builds until it finally drops. When that moisture meets cold air over Mammoth Mountain, you get the Eastern Sierra snow you know and love.

However, the reason Mammoth Mountain receives as much snow as it does is because the other mountains nearby act as a natural funnel that sends weather systems directly over Mammoth’s location at a low spot in the Eastern Sierra range. As a result, Mammoth Mountain naturally gets more snow than anywhere else in the range.

The snow that falls over Mammoth Mountain is the byproduct of weather from all over the world. For example, we mentioned arctic air mixing with precipitation earlier, but seasonal weather patterns over the Pacific Northwest and Pacific Ocean also affect how much snow falls on Mammoth Mountain.

We’ve put together a post on where to find the best Mammoth Mountain weather forecasts here.

How much snow falls on Mammoth Mountain affects many more people than only those who are concerned with skiing and snowboarding on it.

Since the population of Southern California demands more water than the region can naturally produce, the city of Los Angeles looks to the Sierra Nevada Mountains and their snow-covered peaks for water. In fact, Dave McCoy, the founder of Mammoth Mountain, first explored the Eastern Sierra as an employee of the Los Angeles Department of Water and Power. At the time, cities like Los Angeles couldn’t wait until the spring melt to know how much water would be available after winter, so they paid people like McCoy who were crazy enough to ski up to 20 miles a day to measure snowfall throughout the Sierra so they could predict how much water would flow down from the mountains in the spring.

Today more so than ever, Southern California relies on Sierra snowmelt for water. Don’t get your hopes up about getting paid to ski in the backcountry though, because today’s hydrology is a little more complicated than that. Hydrologists measure snowfall today from a plane equipped with a system that basically compares elevation before and after snowfall to measure how much snow is on the ground as well as through sensors placed throughout the mountains.

If you want more information about Mammoth Mountain’s snowfall or just want to see some beautiful footage of snow falling on Mammoth, check out the 10 minute video below!