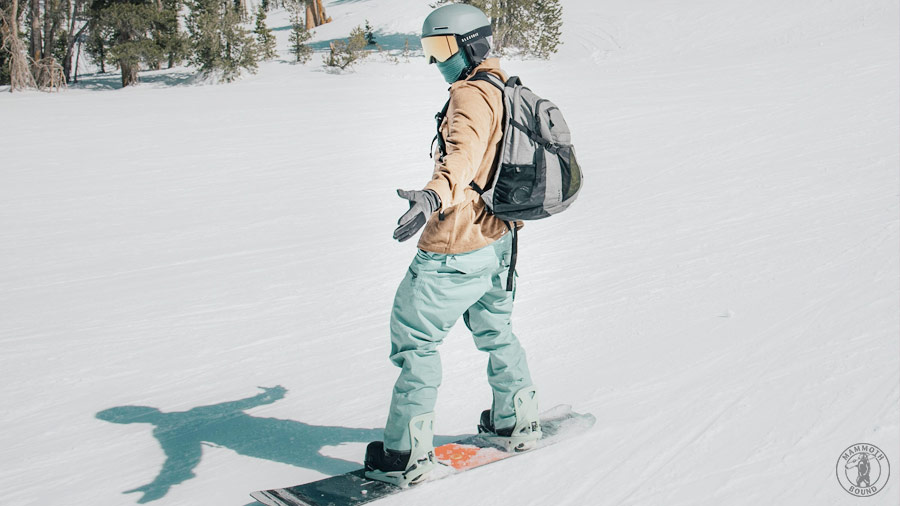 When done right, snowboarding looks effortless, smooth, and just plain fun. No matter what you do to prepare, your first day of snowboarding will not look like that at all though. You, just like everyone else learning how to snowboard will probably make some common beginner snowboarding mistakes.

In fact, chances are you’ll spend more time on the ground than on your feet, but if you stick with it then you’ll be rewarded with a sport that keeps you active and exploring the great outdoors for a lifetime. To help you get past your first day and to the fun part of snowboarding, the Mammoth Bound team has created a guide on how to avoid the most common beginner snowboarding mistakes. Read about it below or share it with anyone who is about to get on the snow for the first time!

Leaning Back too Far During Turns

Getting to the point that you can even ride long enough without falling to start a turn is an accomplishment, so don’t take a step backwards by making a habit of leaning back as you turn!

Turns require you to lean on your edge, and for new snowboarders that often means falling as they learn to balance on their board’s edge. As a result, many new snowboarders will lean onto their back foot to avoid falling but doing so lifts the nose of the board up and makes it impossible to hold the edge as it’s designed. If you catch yourself leaning back during turns, make an effort to keep weight on your front foot to remain centered. Most of the time, people lean with their shoulders and upper body, so focus your forward lean there. 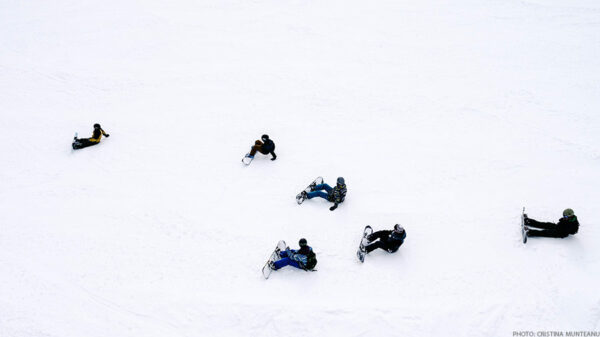 Like we mentioned earlier, turns involve balancing on your edge. Finding that balance takes attempts and falls, so most new snowboarders will try to avoid falling by rushing their turn instead of actually balancing on the edge. Many new snowboarders will rush their turns by either kicking out their back foot so that the board is horizontal or by swinging their upper body and arms around so that they spend as little time on their edge as possible. The problem is, you won’t be able to make smooth turns until you learn to balance on your edge.

Learn how to make turns properly by taking them slow and focusing on finding your edge and balancing on it as it digs into the snow while staying centered on your board. You may fall a few times as you get your footing down, but you’ll avoid having to unlearn bad habits!

Leaning too Far on an Edge

Finding balance on your edge is key to turning, but it’s easier said than done. Most new snowboarders compensate for their lack of balance by straightening their knees on their heel edge and leaning too far back or bending over too far forward on their toe edge. Both are mistakes that will cause you to fall, so keep your knees partially bent as you’re riding your heel edge and your back straight while on your toe.

Ignoring how to Skate

Skating doesn’t affect how well you ride on the slopes so it often gets overlooked by beginner snowboarders, but if you want to get onto and off of lifts then you need to have it down.

Practice skating by unstrapping your back foot from your binding and pushing yourself around the base area for five minutes before you get on your first lift of the day to make sure your skating skills stay on par with your riding skills. You may be tempted to push off with your back foot from in front of the board, but always kick off from behind where you’ll have better power and balance.

Rent your snowboard gear here before your next trip to Mammoth!

How to Avoid the Most Common Beginner Snowboarding Mistakes