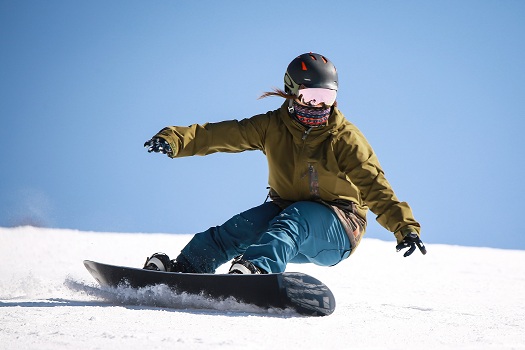 Posted on November 7, 2021November 4, 2021Posted in Skiing & SnowboardingNo Comments on Can I Go Faster on Skis or a Snowboard?

If you go technically by the numbers and consider the added boost from gravity, skiing is faster. The fastest skiing speed is nearly 160 miles per hour, according to Xspeedski.net, while the fastest snowboarding speed is around 125 mph. But if you dive a bit deeper, there are some other things to consider with speed when on skis or a snowboard. The friendly folks at Mammoth Bound, the place to go for high-quality ski rental and Mammoth snowboard rentals, outline them below.

When you’re within the beginner range with skiing and snowboarding, it’s generally easier to maintain your center of gravity on skis. While on a snowboard, it usually takes some time to get used to shifting your weight and position on the board. For this reason, beginners are more likely to be a bit faster on skis than on a snowboard. It’s also more common for snowboarders to go slower at first until they gain confidence. The winner here is skis when all these factors are considered.

Even as you get better at skiing and/or snowboarding, skis still have an advantage speed-wise, according to Snowskool.com. The reason for this is because of wind resistance and similar factors that can affect speed. When you turn on skis, your body lines up the same way as the skis, which reduces drag. On a snowboard, there’s asymmetry when you’ll need to do toe or heel turns, since you’re not facing forward. What’s more, the way you tuck your body on skis cuts down on wind resistance. The winner in this case is, once again, skis.

Now let’s look at equipment. Typically, skis are longer than a standard snowboard. For this reason, there’s more surface area for you to position your body and feet on skis. The extra surface area also makes it easier to distribute your weight more evenly, and this gives you an advantage with speed. Also, when on a snowboard, all your weight is on one specific edge or surface and not divided over two edges. Therefore, in terms of equipment, skis have the speed advantage.

Speed also plays a role in how much air time you can get when on skis or a snowboard. Because of the way skis are designed, it’s more common to get much more air time when on skis. The Olympic record for ski jumping is more than 800 feet. There are no comparable records reported with snowboarding, so again, skis come out on top.

Considerations Other Than Speed

If you go by speed alone, skis clearly win. That said, there are other factors to consider when you decide which activity you enjoy. If you’re just looking to casually take part in fun winter activities, go by what personally appeals to you the most. There’s also the joy and personal satisfaction that goes along with gaining more confidence and skill on either skis or a snowboard.

Now that you have some information about how to achieve maximum speed on the slopes, plan ahead and prepare to have a fantastic time at Mammoth Mountain. If you need high-quality snowboard or ski rentals in Mammoth, Mammoth Bound is your one-stop shop for renting the equipment you need. Stop by on your way to the mountain or contact us at [email protected]

Can I Go Faster on Skis or a Snowboard?