Posted on March 2, 2020June 2, 2020Posted in Skiing, SnowboardingNo Comments on The Basics of Skiing and Snowboarding at Heavenly

Between the fantastic snow, beautiful Lake Tahoe, and the incredible mountains, Heavenly Ski Resort is a perfect slice of California’s world famous wilderness. The only problem is that there’s so much of it.

Trying to see everything Heavenly has to offer is like trying to eat an elephant, the only way you can do it is one bite sized piece at a time. Fortunately for you, that’s exactly what we’ve listed below. Keep reading for the basic information you need to know before your first visit to Heavenly!

The Biggest, Highest, and Tallest Mountain in Lake Tahoe

Get tired of the seeing the same scenery and trails over and over again? That won’t be a problem at Heavenly.

You’ll find groomers, double blacks, and just about every other type of terrain imaginable at Heavenly, but that doesn’t mean that this mountain lacks beginner friendly runs either. In fact, nearly half of Heavenly’s terrain is rated for beginner and intermediate skiing. Just look at Heavenly’s trail map and you’ll see a ton of long blue runs in the middle of the mountain. Not only do these mean that beginner and intermediate riders have an incredible amount of choices on where they ride, but thanks to Heavenly’s large vertical elevation these runs are long enough to leave even the best athlete’s legs burning. 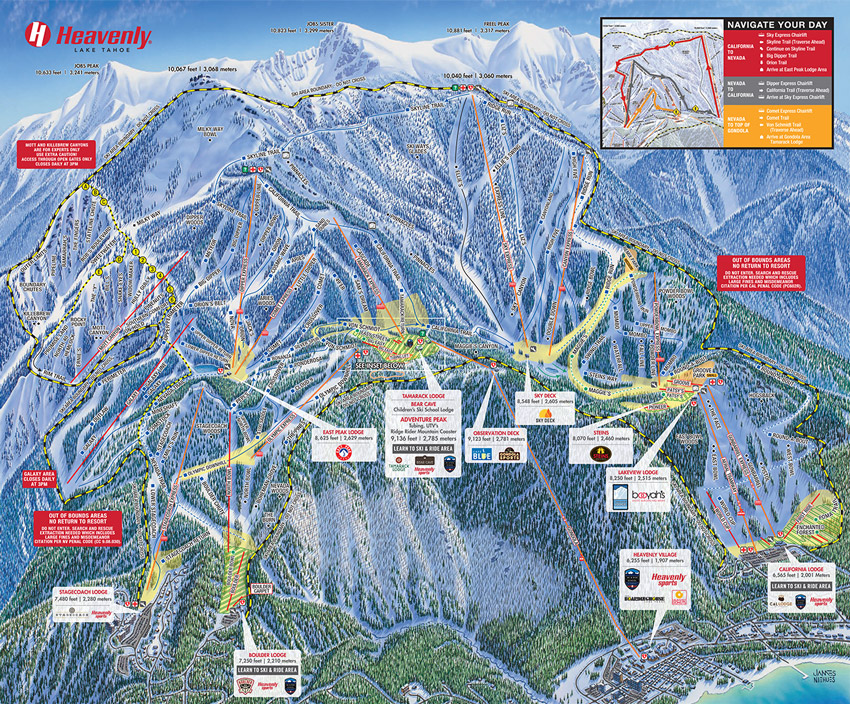 Just because Heavenly is located in the mountains doesn’t mean that California’s famous sunshine doesn’t fall here too. In fact, Heavenly gets over 300 days of sunshine every year and remains dry during the summer. When winter rolls around though, the temperatures average around freezing and precipitation picks up in the form of serious snowfall. In fact, Heavenly averages 360 inches of snow every winter in between all that sunshine.

Watch out for Traverses Between California and Nevada

If you’re a snowboarder, or even a skier who doesn’t enjoy pushing themselves, then watch out for the long trails that traverse the areas between the California and Nevada sides of Heavenly’s boundaries. These runs are excellent for moving across the mountain, but they’re also flat. Unless you keep enough speed to reach where they turn downhill, you will have to push yourself to get to the end of the trail.

The Basics of Skiing and Snowboarding at Heavenly